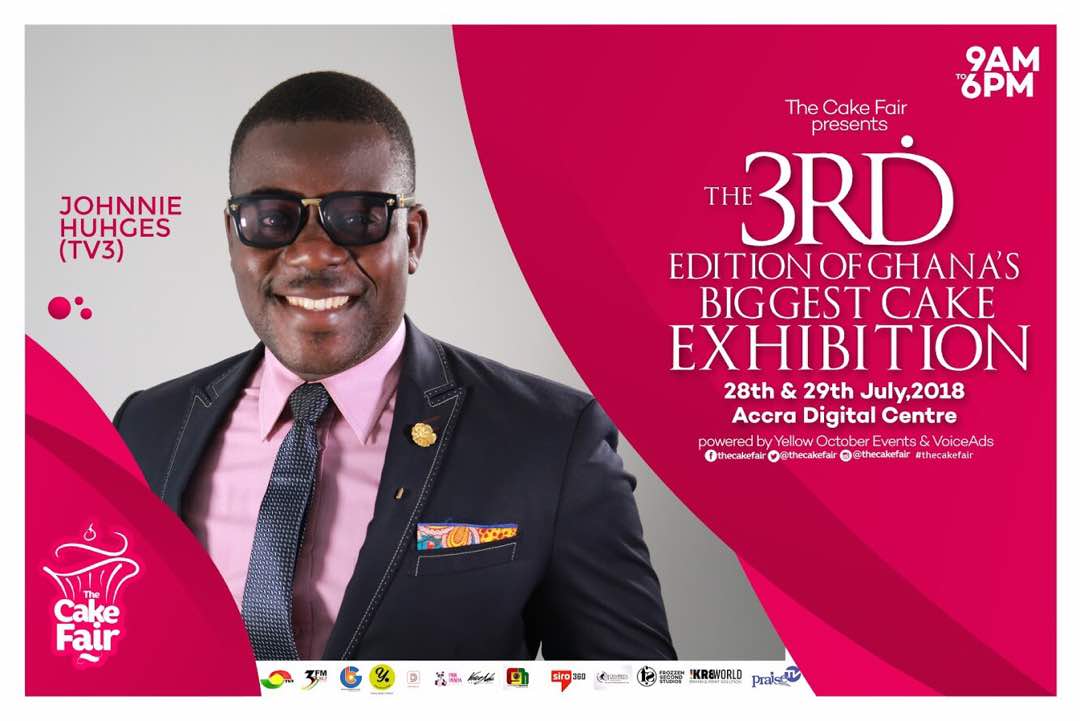 Everything is set for yet another unforgettable moments with family and friends, as the countdown to a showdown between cake and man begins. The Cake Fair will be happening on Saturday and Sunday, July 28 and 29, this month from 9am – 9pm at the Accra Digital Center, off the Kaneshie Highway.Over 40 cake companies that specializes in assorted cakes, cake accessories, cake equipment and supplies will be showcasing mind-blowing designs at the third edition of Ghana’s most influential cakes brand event.The Cake Fair provides both startups and leading vendors in the country’s cake decorating, sugar craft and baking industry the biggest networking platform to showcase their finest unique cake designs and accessories, while making available so much free samples to taste, making dazzling moments and memories with great music collections.

This year’s cake fair has Ghana’s leading media power-houses TV3 Network Limited and 3FM as partners to capture sights and sounds to its viewers and listeners across the country.Join the countdown to The Cake Fair on 28th and 29th this month. Also visit our social media platforms (Facebook, Instagram, & Twitter: Thecakefair) for updates and more details. The Cake Fair is Partnered by TV3 and 3FM, supported by Pink Panda Bakery, Suro360, CypressGH, Donkors Blog and Crabbita Media and powered by Yellow October Events and VoiceAds.

Related Topics:The Cake Fair
Up Next

The countdown is on and the BET Hip Hop Awards 2020 to be held … is nigh. Prior to the award ceremomy, a BET Hip-Hop Cypher is done to showcase the best rap talents from either rap groups, countries or continents. This year 2020 has been a good year for Kwesi Arthur as he joins in on the BET Hip Hop Cypher representing the motherland Ghana.

In 2010, Ghana was well represented in the BET Hip Hop Awards taking the Ghanaian rap heat to the international scene. The cypher featured Ghanaian acts; D-Black, Edem, Tinny, The grandpapa Reggie Rockstone, Kwaku T, and Baby G. ‘The African Invasion’ was the name of the cypher.

As Ghana is 49 days away from her general political elections, a group of local musicians and singers are coming together to promote love, peace, hope and a sense of comfort during these difficult and excruciating times by taking part in a free live music event dubbed “GH Unite Live Virtual Concert”. This is a Loggy Entertainment and Klassik Promo Inc, grassroot effort to encourage the public by spreading joy and positivity through music and arts.

The estimated four-hour concert will bring together a star-studded line up of Africa’s superstars, Samini, Stonebwoy, Kofi Kinaata and Kuami Eugene. The event will be held on Saturday, November 1st, 2020 from 8pm and will be streamed and broadcasted to millions of viewers on www.ghunite.co who have fully purchased a 20 cedis ticket from www.ghunite.co. The live virtual concert will however foster healthy relationship among the Ghanaian creatives.

Music is believed to be the power that directly reaches the soul of the individual; it becomes a message that goes from heart to heart – from the heart of the composer that impact the heart of the person. Music has a big influence in the behavior of the human being – it strengthens or soul, it also affects our body, stimulates consumers intelligence and creativity, and it influences the perception we have of the world, hence the need to bring these talentS under one umbrella to speak to the soul.

Ghanaian singer Worlasi has announced the fifth edition of the annual musical and arts event dubbed ‘Worlafest 2020’. Worlafest will be taking place on 7th November 2020 at Alliance Francaise in Accra.

The event will start at 2 pm and end at 11 pm. Tickets for the event can be gotten for 100 cedis at the gate of alliance Francaise on the event date.

‘Worlafest’ is an annual all day music and arts event held in Accra-Ghana. The name itself “Worla” means “the creator”. The festival is also an extension of the artistic facets of Ghanaian musician Worlasi, who doubles as a painter & animator.

The rapper is an alternative musician who communicates life from a peculiar perspective cleverly fusing English, ewe, and pidgin to create a rich tapestry worth placing on a perpetual encore.

President of Women In Performing Arts (WIPA) – an umbrella organization for all females in the creative arts industry, Leonora Buckman, is urging more females to take up DJing as a profession in Ghana.

Leonora Buckman, who also serves as a board member of the Ghana DJ Awards has been a leading advocate in championing the cause of women in Ghana’s creative arts industry.

She lamented the dearth of female DJ role models in the country during an interview about this year’s Ghana DJ Awards on Peace FM’s entertainment review show.

She further stated that “though DJing is dominated by males, it is not a profession reserved for males. We, therefore, encourage female DJs out there to involve themselves in the nomination process. We believe that what a man can do, a woman can also do”.

According to research conducted by the Blogspot, Female Pressure; only 10% of performers at music festivals around the world are female and an even smaller percentage of women are on music label rosters.

Despite female DJs pumping out great mixes and working as hard as they can, the recognition from booking agents and promoters – and the subsequent gigs and success – remain elusive and for the few female DJs, they may have at some point felt like it’s close to an impossible task in front of them.

Due to the phenomenon stated above, Leonora Buckman encouraged females interested in disc jockeying to participate in the Ghana DJ Awards workshop which is scheduled for the 20th of November, 2020, in order to get well acquainted with the practice.

The workshop will discuss such topics such as how DJs can manage their funds, the importance of social media, sound management and brand positioning. The event will also include training sessions on how to operate as a DJ, select music, beat matching, and equalising music, as well as general education on sound and mood curation. Registration details for the workshop will be announced on Monday via Ghana DJ Awards’ Facebook and Instagram platforms. The workshop will start from 9am to 5pm (GMT).

Teflon Flexx’s ‘Maamiyaa’ Featuring Medikal Was Inspired By His Ex

Mark Asari Wakes Up In Heaven In New Video For ‘Blessed’