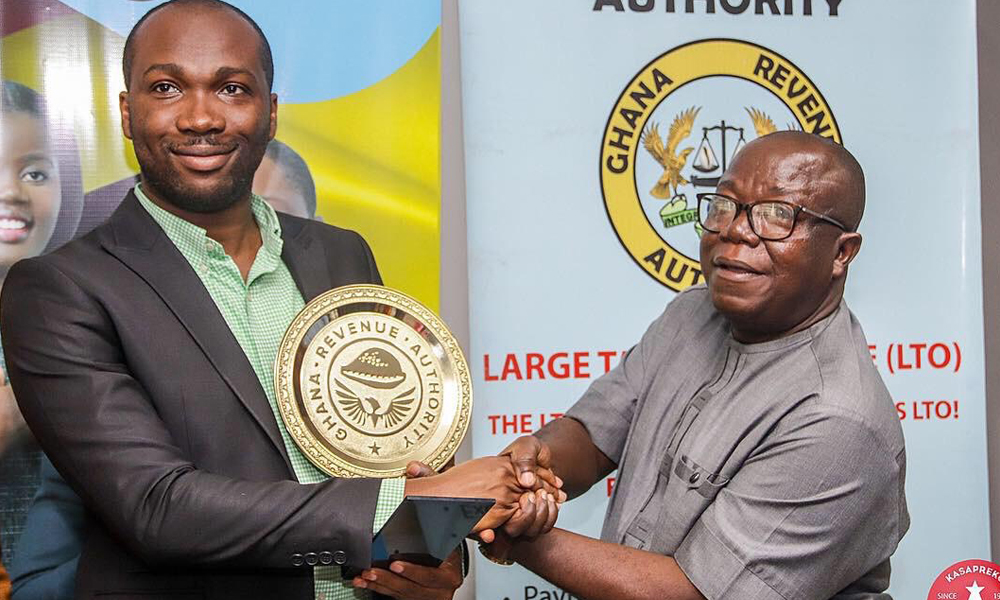 The award is in recognition of KCL’s commitment to the filing of tax returns and compliance to tax laws which has immensely contributed to national development.

Presenting the awards to KCL on behalf of the Commissioner General of the GRA – Kofi Nti, Deputy Commissioner at the Large Taxpayer Office of the GRA, Edwin Gyambrah touted the only local beverage manufacturing company with ISO Certification in Ghana as most tax compliance local company.

The Deputy Commissioner the award is to ensure Kasapreko Company Limited becomes the role model for other indigenous companies serving as an encouragement to them to perform their tax obligations to the government.

“We’ve seen that your compliance rate in terms of your date of filing, regular payment of your cooperate tax, employee taxes and your excise duties have been very good and as a result, the GRA appreciates this and wants to use you as a model to other local businesses that we don’t just collect taxes but we also appreciate things that are done by businesses,” he stressed.

The Managing  Director of KCL, Richard Adjei in his response, expressed his gratitude to the GRA for recognising the efforts of his outfit to the revenue mobilisation process.

He said, one of the key objectives of the KCL over the past years, is to be a company that other businesses look up to in Ghana not only as the best brand in marketing and sales or for Corporate Social Responsibilities but also for paying the required taxes.

“We’re very glad that the GRA has recognised our hard work and contribution to the government and the economy as a whole. We hope that this will be an encouragement to other local companies to follow,” Mr. Adjei said.

He urged the GRA to continue to enforce its laws to enable other companies that are not in compliance follow the law in order to create a fairly competitive landscape for those of those companies that are being obedient and paying the right taxes.

Mr. Adjei further called on the government to also provide some form of tax relief to the KCL as a form of appreciation in addition to the award to enable the company to embark on other job creation ventures which will ensure more taxes are paid.

He said the KCL is building a new factory in the Ashanti Region, precisely at Tanoso in Kumasi and has applied for the one-district, one-factory which is awaiting approval.

He, therefore, called on the government to offer some support in the form of reduced tax rates to enable the company to expand.

“We’re certainly glad that we’re being recognised as the best Indigenous Taxpayer and we hope that the government will also take this opportunity to sometimes give us tax rates to show their appreciation for what Kasapreko is also doing. We’re building a new company at Tanoso in Kumasi and we’ve rightly applied for the 1-district, 1-factory and we’re looking forward to the support that the government will give us as we expand. The more support we get will obviously mean the more taxes we’ll pay. We hope that as we’ve been recognised, the government will also put in place policies to support not only us but the local companies in general,” he appealed.

A citation presented to the company reads: “You are a certified Ghanaian indigenous manufacturer and producer of alcoholic and non-alcoholic drinks established in 1989. Over the years you have contributed immensely to national development through the payment of various tax types. Your contribution to revenue in 2018 was impressive. You have shown growth across all tax types over the years. You increased your 2018 tax payment by 8.5% over that of 2017. You have also shown tremendous improvement in the filing of tax returns. For this admirable consistency in improvement in revenue growth, the Ghana Revenue Authority presents to you, Kasapreko Company LTD the Most Indigenous Company compliant with tax laws for the Large Taxpayer Office”.

“Bio-Larvicide Factory To Be Established In Savelugu” – President Akufo-Addo

The HUAWEI P40 Series is a comprehensive upgrade from the previous generation and is equipped with Huawei’s most sophisticated camera system to date, capable of producing breath-taking imagery with a lightweight chassis.

One of the impressive features is the Ultra Vision Leica Quad Camera. The camera works as a highly unified system, making users shoot captivating pictures at any time of day or night, whether the subject is up close or at a distance.

It also has 45% better colour precision and is capable of accurate analysis and segmentation of environments and people. With pixel level enhancement, it restores the original look with great lighting, natural colour and sharp details

“These devices are testament to the fact that Huawei is unafraid to break the rules and to exceed expectations, and it does all of that in style,” said Huawei in a statement on Friday.

The Huawei P40 Pro is priced at R20 999 and the HUAWEI P40 retails at just R16 999. They are available from 1 June from all mobile operators and www.huaweistore.co.za

Seasoned Professionals To Discuss The ‘The Future Of Work’ At The Virtual MTN Business World Executive Breakfast Meeting On Thursday May 28.

GREATER ACCRA, GHANA, May 27th, 2020/www.gbafrica.net/ Seasoned professionals in corporate Ghana will converge on the MTN Business World Breakfast Meeting platform to discuss the theme “The Future of Work is here-Preparing the Work Place for new Talent Needs”.

Estelle Akofio Sowah, West Africa Regional Manager, CSquared, Julian Opuni, CEO Fidelity Bank, Ghana, Ehi Benitie Co-Founder Rancard and CEO of Clear Space Labs and Franklin Asare, Country Director Oracle Ghana will share insights on how emerging trends in the global economy and how technologies could remodel the way we work. They will also discuss how we can find the right balance between humans and technology, ways to improve employee experience and more importantly explore the unique opportunities embedded in the Future of Work.

The panel will also share insights on how technological advancement such as the use of artificial Intelligence and robotics could impact talent acquisition vis a vis the strong believe that it will create an opportunity for businesses to develop new models for labour.

The MTN Business Breakfast Meeting which has been digitalised will stream live on MTN Ghana’s Facebook page from 9:00am on Thursday 28th May 2020.

Commenting on the theme: the Chief Marketing Officer for MTN Ghana, Mr. Noel Kojo-Ganson, expressed his excitement about the opportunity being created with this online meeting which will allow more people to participate and make contributions to the discussion. He lauded the theme indicating that it was very timely and relevant to today’s workforce and those who are preparing for opportunities ahead. He urged all persons who are interested in knowing about the ‘Future of Work’ to join the Breakfast session via MTN’s Facebook page to gain valuable insights especially in this period where COV!D -19 is redefining the way people live and work.

Def Jam Taps Into “Hip-hop, Afrobeats and Trap Talent In Africa As It Launches In South Africa and Nigeria

Over the past few years, the major labels have invested more aggressively in Africa – both to market streaming services and, especially, to sign talent — and Universal now has offices in South Africa, Nigeria, Kenya, the Ivory Coast, Cameroon, Senegal, and Morocco. Until recently, however, the company’s ventures there haven’t had as much freedom to shape their brand identities as their U.S. counterparts.

Def Jam Africa launches with a roster that includes some of the most successful African talent including Nigeria’s Larry Gaaga and Vector alongside South Africa’s Boity, Cassper Nyovest, Nadia Nakai, Nasty C, Tshego, Tellaman and Ricky Tyler. A majority of who were already signed to UMG. This roster will be supported by dedicated A&R, marketing, creative and digital teams from the UMG teams in both Nigeria and South Africa.

Def Jam Recordings interim chairman & CEO Jeff Harleston said in Universal’s announcement that, taking Def Jam to Africa and other markets could give Universal additional leverage at a time when the major labels are competing more with indies to sign emerging hip-hop acts, adding that, Def Jam is a globally recognized brand, synonymous with excellence in hip-hop. Fittingly, the new division’s logo combines the image of a tonearm Def Jam uses on its vinyl releases with a map of Africa.

Dlamini shared in a press release that the aim for Def Jam Africa is to become the authentic and trusted home of hip-hop and urban culture in Africa. “Def Jam Recordings has always historically pushed the boundaries of the genre,” he said, “and we are excited to create a new community of artists within the continent, shaped around the unique and multi-cultural sounds, rhythms and productions coming from our streets, in order to help elevate hip-hop, afrobeat and trap music from Africa, to reach new global audiences within the continent, across the diaspora and beyond.”

TOPLINE With most live sports suspended during the coronavirus pandemic, online gamblers have turned to different contests like Russian table tennis and Korean baseball, while also betting on everything from video games and reality television shows to political news and even the weather.

Bettors have certainly shown interest in gambling on the outcomes of their favorite TV shows: According to data from BetOnline, there was even a flurry of betting on the final episode of The Last Dance, with odds on things like whether Michael Jordan would cry while being interviewed or how many people would be shown with a cigar in their mouth.

WHAT TO WATCH FOR

Sportsbooks are seeing huge pent-up demand as some major sports like NASCAR and German Bundesliga soccer start to resume. Soccer, which normally makes up 45% of the Smarkets’ betting volume, fell to 23%, maintained largely by interest in the Belarusian Premier League and Nicaraguan soccer, both of which continued to play games amid the pandemic. With the German Bundesliga resuming last weekend, betting volumes increased 428% compared to the previous round of fixtures before coronavirus, according to Smarkets.

“When you don’t have all the normal content, customers will migrate,” Avello says. “That’s the positive that’s going to come out of this—we’re always looking for additional content.”

DraftKings reported record betting during the NFL Draft last month—13x the volume from last year—and has also seen strong interest in the recent return of Ultimate Fighting Championship events, the company said. “We got good action on the stuff we did, but now that we’re starting to get back to core events, demand should rise even higher,” Avello predicts. If the NBA and NHL start playoff seasons this summer and the MLB returns, for instance, “it could be one of the bigger summers that we’ve ever had.”

“Don’t Change To Fit In – MzDru Advises The Youths

If It Weren’t Madagascar, But An European Country That Had Discovered The Remedy COVID-Organics, Would There Be So Many Doubts? – Madagascar President Asks

Stonebwoy Releases The Latest Video From His Anloga Junction Album