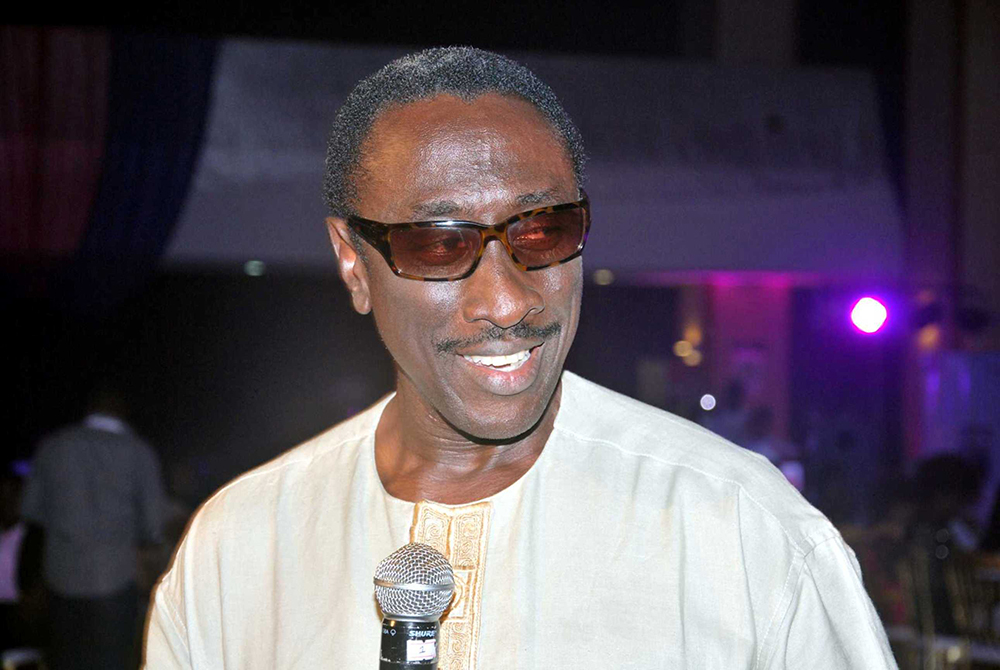 Ghana’s King of Satire, Kwaku Sintim-Misa popularly known as KSM, is set to lecture at The University of Rhode Island on Wednesday, 10th April, 2019.

In an official invitation letter signed by the Vice Provost for Global Initiative, Gifty Ako-Adounvo, PhD on behalf of Dr. Donald H. Dehayes, Provost and Vice Chancellor for Academic Affairs to KSM, they expressed their fondest pleasure in hosting the ‘Afia Siriboe’ character as a Distinguished Visiting International Scholar.

“Your accomplishment in the arts and engagement with tough social issues of our times, identified you as a distinguished choice for the program” the letter stated.

KSM’s visit, is in tandem with the university’s Distinguished Visiting International Scholar program which has as its objectives; commitment to building international collaborations, enhance visibility for the institution across the globe, demonstrate commitment to research and scholarship, and strengthen emphasis on global learning and discovery.

KSM, who is poised for action, when reached, said, “I’m just going to serve them with a dose of what I’ve been serving Ghanaians and Africa all these years. There will be enough for them to laugh over, and at the same time, a privilege to share and learn from both parts.”

During his stay, he will do public presentations, meet with groups of undergraduates and graduate students as well as faculty, and attend a reception.

The University of Rhode Island is the main sponsor with co-sponsorship from its Harrington School of Communication and Media.

Kwaku Sintim-Misa was born the fifth of six siblings on December 5, 1956, in the city of Kumasi. He attended UST Primary School, the Presby Boys Secondary School (PRESEC), and Prempeh College. After completing college, he received specialised training at the renowned National Film and Television Institute (NAFTI) in Accra.

Anxious for a deeper investigation into the performing arts, KSM left Africa to major in acting and directing at Trinity College in Connecticut, USA. He subsequently earned a Master of Fine Arts in film production from New York University.

KSM launched his acting career with a variety of Off-Broadway and Public Theatre roles. He was also featured in the popular American crime series Law & Order (in 1994) and on the drama series Medal of Honor Rag (by the Tony Award-winning director Lloyd Richards.)

KSM became the first African to stage an original Off-Broadway play when he produced Thoughts of a Confused Black Man, an immensely popular one-man show that raised compelling questions about race in the United States. In 1997, inspired by his American career, he returned to Ghana to make his mark as a proud nationalist and edutainer.

KSM used a combative, confrontational style which shocked his listeners into frankly discussing relevant national issues. He continued to refine his style with the show Nyame Som Ye De, which inspired Ghanaians to think beyond religion to define their broader spirituality.

After making a name for himself as a radio host, KSM created what has become one Ghana’s most popular talk shows: Thank God It’s Friday (TGIF). TGIF was the first broadcast of its kind to fuse serious talk, education and humour.

Since its inception, the show has featured gripping stories from entrepreneurial street vendors, dancing presidents, pioneering scientists, leading artists, and many more exciting characters. Despite the broadcast success, KSM has never abandoned the stage.

He has written, directed and starred in a series of one-man comedic plays, popular and memorable ones being: Saga Of A Returnee, Afia Siriboe, and Politically Incorrect.

KSM’s live performances use comical characters to illustrate the key social, economic and political issues concerning Ghana. They are produced by Sapphire Ghana Limited, a content development company that he founded and uses to integrate social issues into television, radio, and stage productions.

In 2009. KSM released his first feature length film, a psycho-thriller entitled ‘Double.’ He has written and produced a variety of television shows, including Hot Bench, Divorce Court, Build Your Ark (for SSNIT), and a number of medical documentaries.

Watch The KSM show every Friday at 9: 00pm on Metro TV.

FEATURE REPORT: Akrobeto Has Got The World ‘Laughing Out Loud’

Throwback to approximately two years ago when Ghana’s leading local languague broadcasting network – UTV Ghana announced actor and comedian, Akwasi Boadi, also known as ‘Akrobeto’ as the new addition to the list of its prolific on-air personalities to help disseminate news items to its audience, the whole country was left in a state of what was described as ‘discomfort’ due to his ‘poor’ formal education and journalism background.

Akrobeto was born at Ayirebi in the Ofoase Ayirebi constituency in the Eastern region of Ghana. According to his wikipedia, he did not have any formal education. He was a founding member of the Kristo Asafo drama group, when the drama group was founded by Apostle Kwadwo Safo in the late 1990s, along with Agya Koo, Mercy Asiedu, Nkomode the group performed in the Key Soap Concert Party at the National Theater. In 2008, he started featuring in kumawood movies.

What does an “illiterate” got to do with Journalism or radio and tv presentation? Well! I guess this paragraph will justify his call. Growing up in the sonic landscape of Ghana, we met a different style of practical journalism or broadcasting, thus, instead of employing well trained personalities with qualities like Investigative Skills, Tech-Savviness, Analytical Mind,etc into the field (that would however render the masses jobless), local media houses created shows – dominated by softnews that gave “illiterates” (with basically the ability to entertain an audience by making them laugh) to present on odd days and at odd hours. (Ofcourse no producer will air comedy oriented show on actively working days and hours).

Following his appointment as the host of “The Real News With Akrobeto”, the show and the media house started generating interesting conversations amongst the Ghanaian populace of heterogeneous background, majority of which has been centered on the humor aspect of it. Each episode was anticipated as it has become a weekly dose of laughter to cure boredom and to fight stress. The television show has become the most viewed programmed in Ghana with an overwhelming digital presence. Snippet from the show has become the recent social media memes. Internet users use excerpt from to show as comments to other’s posts.

Fast forward to 2020 – an era where the world is battling the glabal pandemic, Coronavirus, the veteran Kumawood actor has gotten international recognition with his comic news on Ghana’s UTV on Fridays. The show focus on trending news – dominated by entertainment & social news and has recently added sports news. He has made the world a little bit brighter with his hilarious sports presentation sketch. Boadi decided to take a shot at reading out a string of scores from the Premier League during ‘The Real News with Akrobeto’, but not in a way you’d expect.

His pronunciation of the club names as well as the players are ribs breaking. The recent news he aired about Cesar Azpilicueta, the captain of Chelsea Football Club attracted his attention and got features on Spanish tabloid – Marca, El Chiringuito TV, Sport Bible, Footyhumor, Falcons among others. Despite UTV being a Twi TV station, Akrobeto combines English and Twi as the medium of communication to his audience.

AKROBETO HAS GOT THE WORLD LAUGHING OUT LOUD

Check out reactions from international media houses below;

Watch episodes of the show below;

Comedian Kevin Hart’s latest stand-up special, Zero F**ks Given, is officially available to stream. Its launch marks the sixth Netflix comedy special from Hart and the first since his 2019 show Kevin Hart: Irresponsible.

The show was filmed in September of this year, and considering the state of the world, the format will likely be much different from previous specials that take place in front of large audiences. Despite this, fans can expect Hart’s signature style of comedy, but with a twist. While the details of the special have been kept under wraps save for a few social media posts from the comedian, Netflix offered up an intriguing description of Zero F**ks Given that sounds quintessentially Hart: “Kevin Hart serves up laughs and brick oven pizza from the comfort of his home and dishes on male group chats, sex after 40 and life with COVID-19,” said the Network.

Koo Kumi, one of Ghana’s greatest poets is yet to release a spoken word poetry album titled ‘The Griot’. The poetry album tackles politics, urbanization and movement, culture, age of youth, and gender-related subjects such as sexual violence and victim-blaming (sexual abuse). The Griot seeks to present stories in its truest forms to start conversations about the topics above. All the poems were produced and engineered by various talented young people all from the Akuapem Ridge in Inner Groove Studios located at Aburi Akuapem. The album will also feature one of Ghana’s biggest rap act.

In 2019, Koo Kumi released his first spoken word compilation titled Woke On The Mountain (WOTM), an EP of seven (7) tracks, six (6) poems, and one (1) skit. WOTM was the start of Koo Kumi’s experimental poetry which leaned towards music and alternative hip hop. In May 2020, he released a
three (3) piece Spoken Word EP titled “An Ode To A New”

William DuBois Yaw Sakyi Kumi also known as KooKumi is a spoken word artist who identifies himself as a multi-disciplined artist with a background in visual arts and performance art. He hails from Mampong Akuapem from the Eastern Region of Ghana.

Renowned Nigerian comedian, actor, and writer from Delta State, Bovi has released season 2 of his comedy series ‘Banana Republic’. Season 1 of ‘Banana Republic’ was full of condensed humour and already the first episode of season 2 has so much drama.

President Frank Whyte is threatening to attack Russia, find out how that works out for him.

Press Kit 2 (The Journey), A Masterpiece From Asquad

SELLY GALLEY: How The Ghanaian Media Personality Ascended To Fame