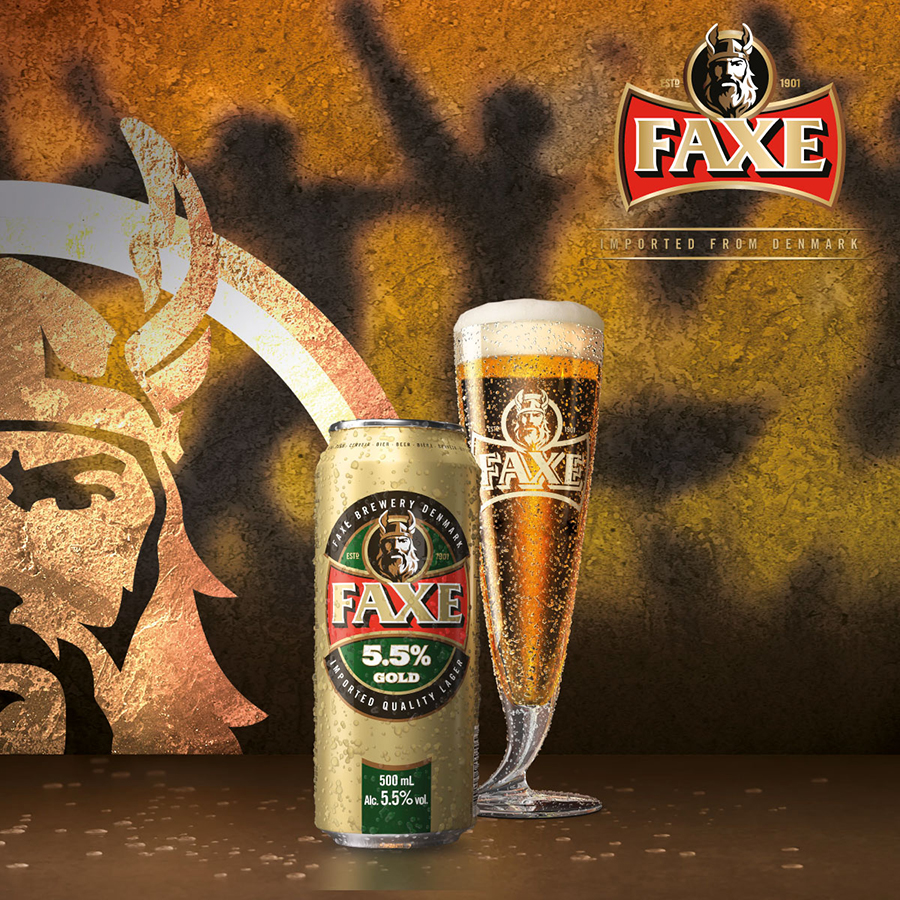 At the launch, Faxe beer took a bold step to unveil the gold liquid, brewed specially for bold and deserving.

On Friday, 7th September, 2018, Accra witnessed the most extraordinary party yet! The famouse Labadi Beach Hotel was completely filled with a specially invited number of guests who were curious to discover what an initial social media campaign #5point5gold was all about.

This party was to serve as FAXE Beer’s official launch of the new 5.5 Gold edition into the Ghanaian market as the smooth and full-bodied all-malt lager beer imported from Denmark.

The campaign began about two weeks ago when top Ghanaian bloggers and celebrities AmeyawDebrah, YemmyBaba, KOD broke the internet with an eclipsed image of the FAXE VIKING and hashtag #5POINT5GOLD.

The campaign introduced a test to direct people to a landing page to share their passion and life aspirations. Successful applicants were then given digital invitations to experience the exclusive FAXE BEER 5.5 GOLD launch party on Friday.

FAXE BEER also had a city tour to personally handover invitations to key celebrities and media personalities who took pictures with a photo frame #5point5Gold confirming that they would attend the remarkable party.

The highlight of the night was the presentation by Nicholas Baroutis, Commercial Director for Africa at ROYAL UNIBREW INTERNATIONAL, the second largest brewer in Nordic and Baltic region with exports to 85 countries worldwide and 2017 revenue of over $1 BILLION. Nicholas took guest through the history of ROYAL UNIBREW, 115 years of FAXE BEER’S evolution, international success of FAXE 10% at 300% growth rate in Africa since 2012 and revealing the bright vision of a new expansion for FAXE GOLD 5.5%.

The presentation was followed with the MC of the night Radio presenter, Antoine Mensah calling on stage THIERRY OUATTARA – Regional Manager for West Africa UK for Royal Unibrew, SABINE NAKOUZI – GM for Marina Market, and MR. ELIE SARKIS – MD for Marina Market for an epic countdown to the explosive unveil of the smooth gold liquid. At the end of the countdown, the brand had a grand introduction truly worthy of a Smooth Gold Liquid.

Afterwards the famous DWP academy gave a captivating flash mob performance before three of Ghana’s best DJs – DJ Nyce, DJ Xpliph and Sheldon The TurnUp took turns thrilling guests as they enjoyed sharing the new gold liquid, dancing and other side experiences such as the Gold Carpet photo shoot session on an amazing backdrop made from recycled FAXE GOLD 5.5 cans.

The party didn’t end there as Saturday night saw first hand display of many activation parties intended to be hosted by premium bars in Accra. KIKIBEES RESTAURANT BAR & LOUNGE got the honoured to host the first FAXE party after the launch.

The launch campaign for the new FAXE GOLD 5.5 was developed and managed by moment.com (OMENT WORLD LIMITED).

Entertainment and lifestyle brand, ZoneThree6 has begun curating music playlists content on various music streaming platform for artists. The various streaming platforms will have orchestrated playlists for music lovers on Tuesdays and Fridays, with the “Flow Factor” making a debut This Friday, which will have Ghanaian Hip Hop songs.

Speaking on the new digital music playlist platform, The Chief Operation Officer of Zone Three 6 Network Limited, Quabena Kevin said “this is an important step in the Ghanaian music scene to promote our local content and share it beyond bothers, for our talented and creative artists to get the recognition they deserve.”

The playlists will have genres such as Hip Hop, RnB, Afrobeats, Ghana drill and other emerging sounds from Ghana on streaming platforms such as Apple music, Spotify, Audiomack, Soundcloud, Tidal, Deezer and Boomplay as ZoneThree6 seeks to promote sounds coming from Ghana. The Zonethree6 playlist is powered by DistroPlug, a 100% music company offering full services in music and video distribution and other digital music service such as playlist pitching and royalty collection.

David Drexx George, a Ghanaian/Nigerian tech entrepreneur and the founder of DistroPlug said the collaboration between his outfit and ZoneThree6 is a big win for Ghanaian musicians and their managements and will also help monetize their work.

“Distroplug was created to reduce the stress artists and their managements go through. It also seeks to provide an essential aspect of competing globally, as the world continuous to move into the digital space” he added. ZoneThree6 has provided a universal digital platform online for all their services. Visit the link tree via https://linktr.ee/Zonethree6

Shatta Wale has revealed that, the management of Shatta Movement Empire and Shatta Tuesday Market Initiative, will be demanding moderate rates from organizations or enterprising entities engaged in commercial, industrial, or professional activities to promote their businesses through the Shatta Tuesday Market initiative.

For rates ranging from Ghc 300.00 (1 Day), Ghc 750.00 (3 Days) and Ghc 1,800.00 (1 Week), business owners and or entrepreneurs will have their commerce or trade posted on the Ghanaian reggae & dancehall artiste’s social media pages of about 6M followers. The revenue generated from this initiative will, through the Shatta Foundation, be used to support the vulnerable in the society.

Shatta Tuesday Market is a new initiative, introduced in 2019, from the Empire of Shatta Movement to give back to the community. The initiative which is here to stay is dedicated to help businesses grow to its full potential by giving business owners the opportunity to reach a high number of potential customers.

This decision has triggered a lot of backlash from his fans who claim they spend their resources on streaming the songs by the artiste. See some reactions on twitter below;

Ghana Listed In The Heavily Indebted Poor Countries In The World

The heavily indebted poor countries (HIPC) are a group of 39 developing countries with high levels of poverty and debt overhang which are eligible for special assistance from the International Monetary Fund (IMF) and the World Bank. The 39 countries, including Ghana have qualified for debt-relief under the HIPC Initiative and the MDRI, according to a data and infographic presented by The World Bank.

The World Bank, the International Monetary Fund (IMF) and other multilateral, bilateral and commercial creditors began the Heavily Indebted Poor Country (HIPC) Initiative in 1996. The program was designed to ensure that the poorest countries in the world are not overwhelmed by unmanageable or unsustainable debt burdens. It reduces the debt of countries meeting strict criteria.

As of January 2012, the HIPC Initiative had identified 39 countries (33 of which are in Sub-Saharan Africa) as being potentially eligible to receive debt relief. The 36 countries that have so far received full or partial debt relief are:

As of March 2020, the IMF and the World Bank have determined that Somalia has taken the necessary steps to begin receiving debt relief. Eritrea and Sudan are potentially eligible for debt relief but have not yet started the process. 36 countries have completed the program and had their external debt cancelled in full, after Chad passed the Completion Point in 2015. Tanzania is now not part of the HIPC.

To receive debt relief under HIPC, a country must first meet HIPC’s threshold requirements. At HIPC’s inception in 1996, the primary threshold requirement was that the country’s debt remains at unsustainable levels despite full application of traditional, bilateral debt relief. At the time, HIPC considered debt unsustainable when the ratio of debt-to-exports exceeded 200-250% or when the ratio of debt-to-government revenues exceeded 280%.

One of Africa’s most cherished blogging mouthpieces, TalkMediaGhana has undergone a BIG upgrade boasting of a new name, logo, vision and service(s), all in a silhouette of Elite PR. TalkMediaGhana, as many already know, has been a go-to online blogging portal for years, providing fans of the music arena with tons of exclusive entertainment articles from their favourite artists on the continent and beyond.

Now a full-blown public relations and digital marketing agency for brands looking to expand their base, Elite PR was “a move long coming” as expressed by the Director of Strategy, Francis ‘Banks’ Amissah: “Having had lots of experience in PR through the likes DC Emcees and TalkMediaGhana, I can boldly say this was a move long coming. It’s been a beautiful journey and I’m excited to take things to the next level. My team and I are ready to offer artists and brands alike the full PR experience under our new outfit”.

Lead Editor for Elite PR, Leslie Akangah also had a bit to say: “We’ve all been working very hard for months now, just so we could pull this off as imagined. It’s been a tense exercise, but we are confident this new direction will live up, if not surpass our profound expectations and that of our clients”.

Elite PR is a public relations and digital marketing agency which is dedicated to providing a myriad of services, as well as products for the countless consumer brands looking for premier publicity. They also cover a spectrum of services including: photography, web and graphic design, domain hosting and web development, amid key services like; covering artists and brands PR, event promotion and social media awareness.

Without further ado, let us introduce you to the future of public relations and digital marketing: welcome to theelitepr.com